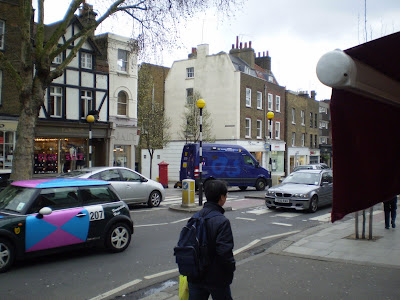 Stop him! A security van hired by Nat West, blatantly ignores the law! Is it now acceptable for vehicles to drive on pavements and over zebra crossing zig-zags compromising public safety simply because they deliver huge amounts of money? Is there one rule for High Street Bank delivery boys and another for the rest of us? 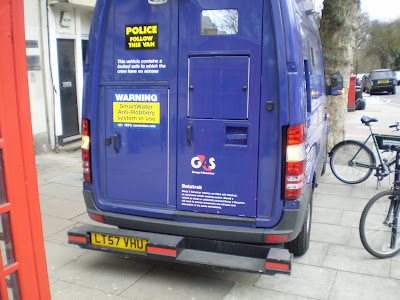 Pictured above: Bessy, the Hampstead Village Voice bicycle narrowly escapes a credit crunching from Nat West's law breaking delivery boys.
We've never had it so good! Don't you love it when financial institutions collapse and crumble and start freaking out because they've lost all their toys. Suddenly they think they can go around shifting goal posts and breaking laws. Even the security guards who shift Nat West Bank's wonga have started spitting their dummies out.
A rather large security van, illegally parked on the pavement outside Nat West was in threateningly close proximity to the Hampstead Village Voice bicycle's back wheel today. So in fear of my bike's health I politely asked the security bloke whether he was indeed  allowed to park on the pavement?
"Fuck Off" was his only reply as he locked himself into the van.
"Charming! There's no need for that, sir!" I retorted before he came back out and grimaced menacingly at me with another rude remark.
Now even more concerned about my bike meeting with 'a nasty little accident on purpose', I waited and watched from the safety of the green grocers as the guard went in and out of the bank with Nat West's booty over a period of about 20 minutes. Bored with shivering in the cold, I eventually decided to move my bike out of harms way and, at that very moment, the Old Bill arrived and asked to have a word with me. From this I can only presume that the guard (who had pictures of West Ham Utd players on the back of his helmet) had 'grassed me up' to the local constabulary. This was a course of action I had previously considered myself but had thought better of.
Yet, having been shopped by the Horrid Hammer, I decided to tell the truth, the whole truth and nothing but the truth to the Old Bill who went and gave the blackguard a jolly good ticking off! And a good thing, too!
After all, the blighter had committed several heinous crimes in the space of only 20 minutes:
1. Driven onto a pavement, over zebra crossing zig-zags with a bloody great van.
2. Narrowly avoided damaging Hampstead Village Voice property.
3. Obstructed a public highway for twenty minutes.
4. Verbally abused a member of the public.
5. Openly supported West Ham Utd on a Hampstead highway.
6. Grassed up a Hampstonian to the law without due reason.
7. Driven back over the pavement and zebra zig-zags to no doubt continue his wanton pillage of civilization as we know it.
Emmanuelle "Mustafa" Goldstein.
...AND ANOTHER THING!
Furthermore one might deduce that this bounder wore the West Ham Utd player stickers on the back of his helmet as some sort of added "please don't clobber me" protection from bank robbers. His logic being that a large percentage of bank robbers are of an East End ethnic persuasion living within the vicinity of the Boleyn Ground and therefore most likely West Ham Utd supporters.
On seeing their footballing hero's on the back of his helmet, the robbers would think to themselves- "Hang on a tick, this security guard's a Hammer! He's one of us bleeding Irons! I'd better had not whack him ruthlessly on the back of the neck with my sawn off shot gun, lest I see him up Upton Park one day".
The Hampstead Village Voice suggests the following immigration boundaries might be advisable to those wishing to frequent our beloved 'village':
People of all persuasions, East End or otherwise are warmly welcomed to live in Hampstead or for visits, work, walks and other dalliances as long as they behave themselves in a jovial, civilized and/or gentlemanly manner. Otherwise they will be asked politely to bugger off from whence they came by our friendly constabulary!
Inspector Clouseau.
Ministry of Love.
PS. We understand that being a security guard is a stressful and dangerous occupation, but we are not in a war zone and there is no need for mindless law breaking and inappropriate rudeness!
at March 19, 2008 3 comments:

LET´S ALL DO THE DISCO!

This Friday the 14th of March 2008 @ ICONS, Pond Street (Conveniently located opposite the Royal Free Hospital and next to a funeral parlour- always handy after a few too many ales!)

Be there before 7pm for a free glass of bubbly.