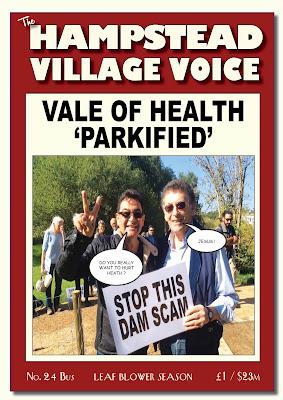 DAM-AGE LIMITATION: THE SAVE THE VALE OF HEALTH CAMPAIGN

The Vale of Health: muddy and that's how we like it. Its a Heath not a park.
Too little too late? Possibly. But all the earlier campaigns having been ignored by the authorities, to do nothing now would be worse than the City of London Corporation, Camden Council and a High Court Judge allowing themselves to be hoodwinked by Atkins/AECOM, the consortium that stands to benefit from the dams' construction.
According to sources, Atkins is on 15% of the total bill that has recently risen from £17m to £23m. Meanwhile, its strategic partner, AECOM, landed the job of 'independent' advisor to Camden Council landing itself £18k for a 37 page report. A tidy sum considering it misled the authorities, public and press into thinking it was 'independent'. How could it be independent if it formed a consortium with the dams' designers and sales people, Atkins, in 2012? A 'three year strategic partnership' is what it says on an Atkins press release. And the result, exactly 3 years later - a huge contract to destroy the Heath.
It makes my blood boil that, of all things, Hampstead Heath has fallen pray to these vultures. Companies that have instilled fear of flooding from some fictional storm as a ruse in order to, as director of Atkins, Andrew Hughes, put it, 'put Atkins back into the first division of dam builders'.
Can we save the Vale of Health and, by the way, deny Atkins and Bam Nutall (the contractors) any payment for a job that simply doesn't need to be done? Can we hold to account the incompetence of Camden Council which failed to properly vet its 'independent' advisors? And can we force action against AECOM for misleading 10 elected councillors into believing they were receiving impartial, independent advice?
If Elizabeth Truss, the Environment Secretary and, for that matter, Tulip Siddiq MP, pull their fingers out and convince parliament to overrule this miscarraige of justice - both at High Court and Camden hearing level, maybe we can.
Please sign the petition now: https://you.38degrees.org.uk/petitions/save-hampstead-heath
Emmanuel Mustafa Goldstein,
Editor, Hampstead Village Voice.
at August 15, 2015 No comments: 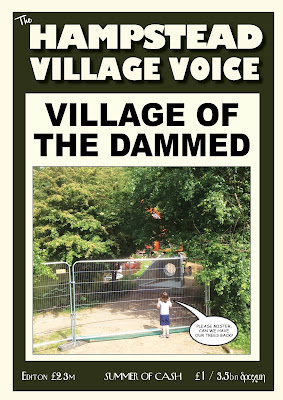 Run for the hills everybody - the Blue Meanies have taken over Airstrip One and most of Hampstonia too... Nothing's sacred when it comes to power, greed and making loads'a'money in what feels like 1980s Tory Britain all over again. Even Thatcher didn't dig up the Heath.
The Labour Party's in tatters and Ultra-capitalism's firmly in control of the Old Stead. Oh woe is me... Where's Michael Foot when you need him?

ALL YOU NEED IS CASH

So what's Hampstead really about these days?
Hampstead Heath? = £23M contract for dam builders, Atkins/Aecom.
Hampstead Homes? = £3M - £100M.
Hampstead's Saucepans? £499 at the new kitchen shop on the corner of Willoughby Road. No I'm not fucking joking. There's even a bread knife on sale there for £279.

It's all over for us mere paupers - even the criminals have nowhere to go: Hampstead Police Station? An empty shell of a building until someone comes up with £XBillion squid. It' millionaires only around here.

But at least there's the Hampstead Village Voice available while shops last for only £1 from Monday 20th of July 2015.

LIBERATION FOR USSR... AND BRENT! 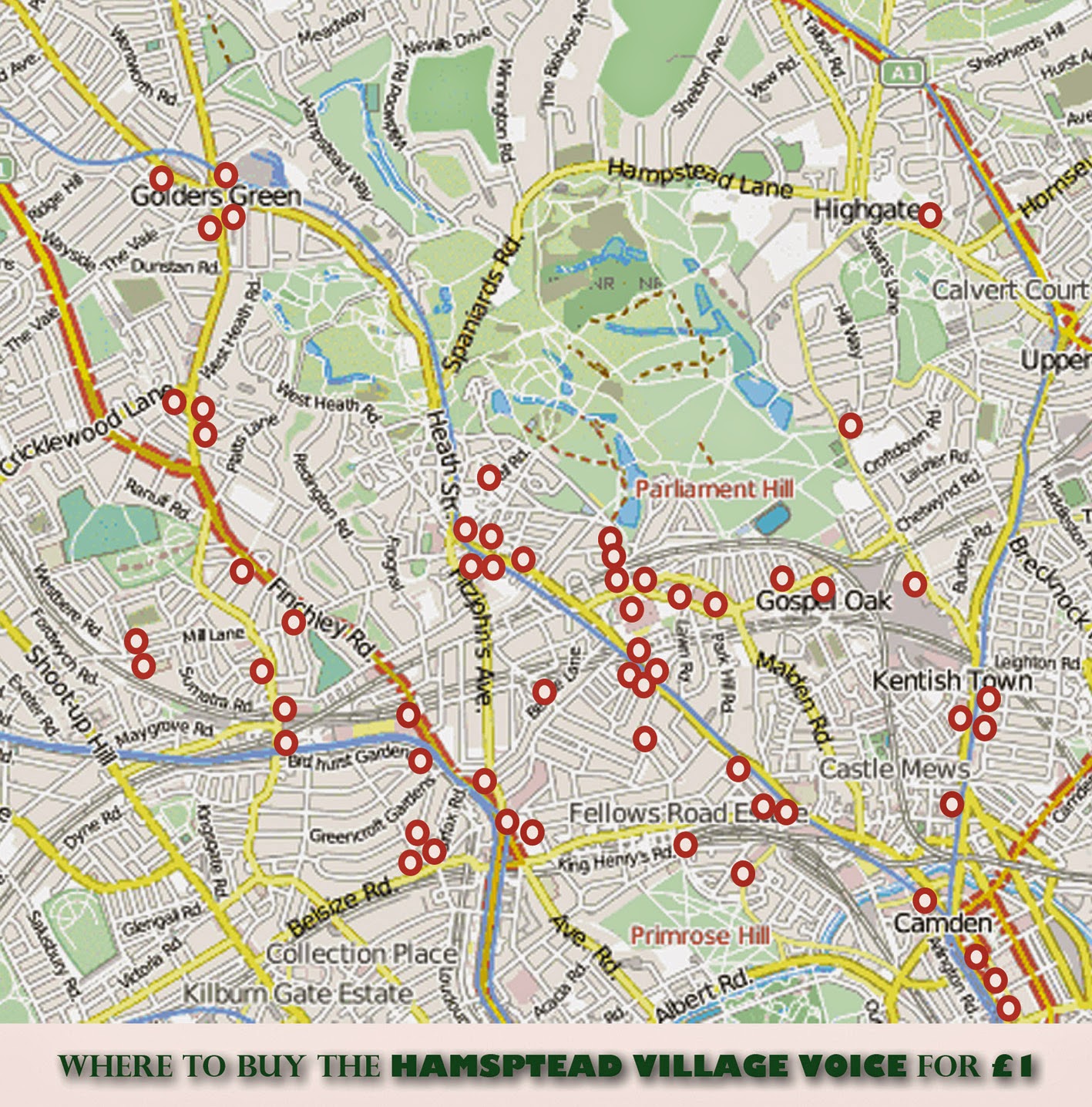 Hampstonian forces successfully invaded the USSR (Union of Soviet Scamden Republics) this week with a tactical 'hearts and minds' offensive entrenching the Hampstead Village Voice into various Scamdenite outlets. Our brave forces have also seized control of Highgate's Ministry of Propaganda AKA. Brooksby the Newsagents, 70 Highgate High St. which is believed to be, not in Scamden, but in Haringey - a nation where one can still park for free.
In a sweeping and lethal pincer movement involving both General Simon 'The Space Correspondent' and Wing Commander Dave 'The Beard', Hampstonia's latest manoeuvre has struck love deep into enemy territory and the USSR can now consider itself 'liberated.'
Golders Green too has been freed from ignorance as has Mill Lane in deepest Barnet... or is it Brent? Well, either way it's in the former Metropolitan Borough of Hampstead so go and buy a copy and show your defiance to Big Brother and his evil,  corrupt Airstrip One stooges. 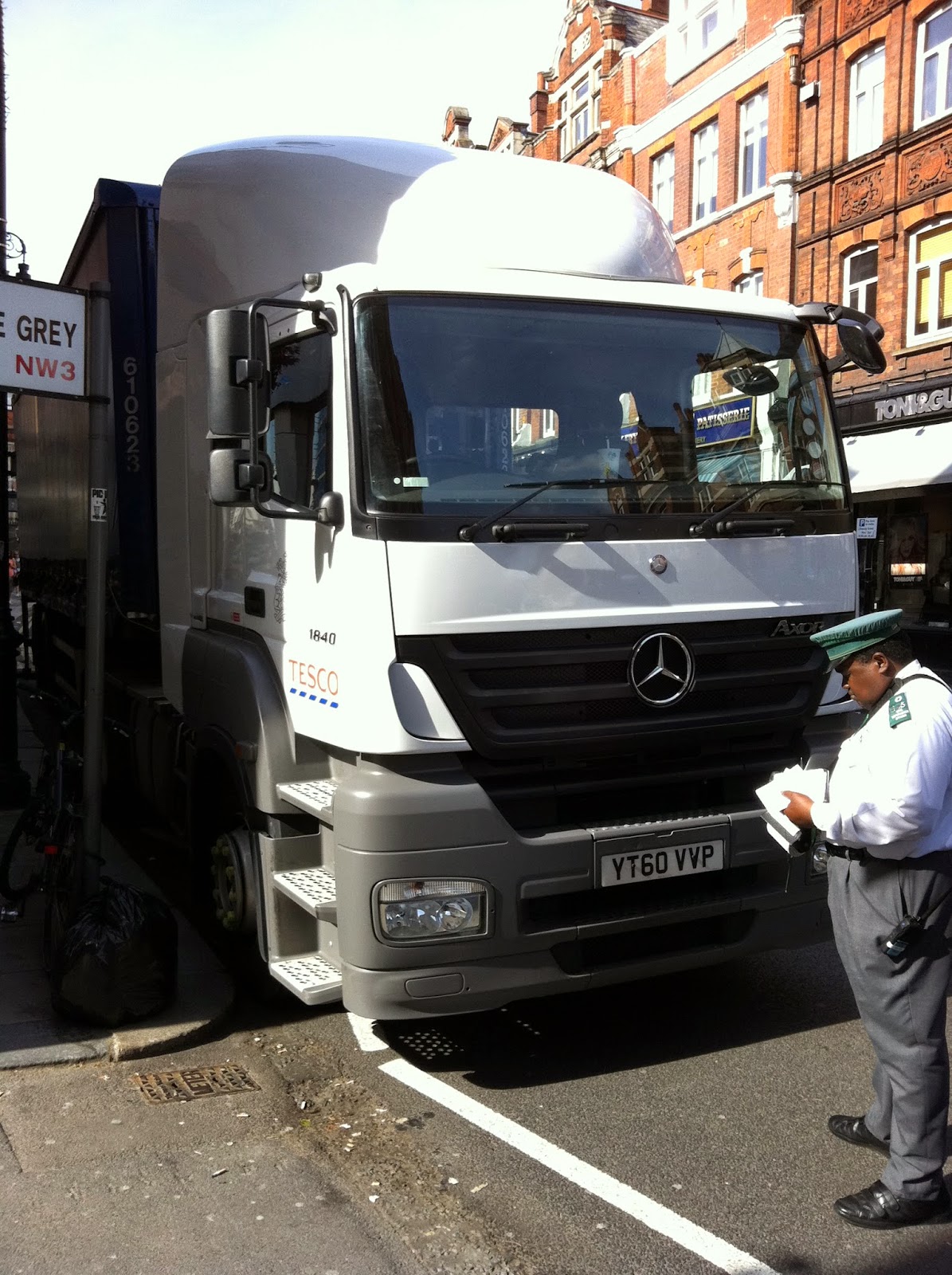