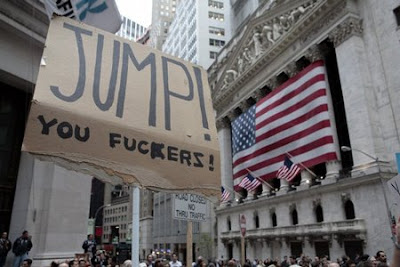 The Financial Crimes section of the Winter Edition of the Hampstead Village Voice is so very splendid I could cry. 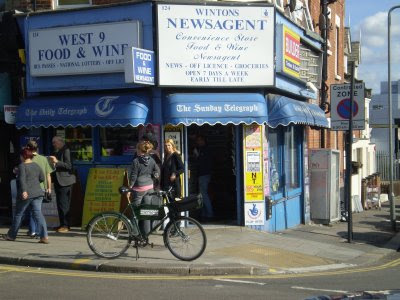 Bessy the Bicycle outside Wintons in West Hampstead who are doing a fine job of selling the Hampstead Village Voice.
It would appear the Soviet Republic of West Hampstead (SRWH) is a bit hit and miss when it comes to the distribution of the Hampstead Village Voice.
On the bright side, Mystery, Hampstead Food & Wine, West End News and Winton's (pictured with Bessy the bicycle) appear to be playing  ball and aiding and abetting the furtherance of our favourite and only local satirical magazine in the cold, harsh Soviet hinterlands of Hampstead's grubby little satellite state known in Victorian times simply as West End.
The same cannot be said of various other SRWH outlets who were happy to take our fine mag on a 'sale or return' basis but then pleaded complete ignorance to ever having received any when it came to coughing up for them. It would not be in the spirit of the Hampstead Village Voice to name and shame the worst offenders as they are not banks, governments, multi-national corporations or 'Street of Shame' medi-whores (who we like to shame at every proper opportunity) but small businesses with zero imagination to whom we can extend nothing but pity.
Pity? Yes because they won't be getting THE GREATEST MAGAZINE OF ALL TIME EVER! the Winter EDITION 6 of the HAMPSTEAD VILLAGE VOICE.
My goodness, it's a cracker! It's only got Russell Brand (who's still skill McGill regardless of what Daily Mail readers think), Nicky Horne, Tony Parsons, Klaus Von Kunst, Ronnie Wood, Eric Clapton (admittedly a very small mention of the man who played guitar on While My Guitar Gently Weeps, but hey, he gave me a hug so fuck it, that's worth a mention. I mean, how many people can say they've been hugged by Eric Clapton on Hampstead High Street?)
Name dropping aside, this really is the best mag we've done so far... Go and buy it. If you're skint and you have to rob an old lady or hold up a bank to get this edition of the magazine then do it. If you have to shag someone's grandad in the missionary position in order to purchase a copy, then so be it! But get it or regret it for the rest of your life!
Yours unfaithfully,
Jonofan Woss
Dr. Jonothan Wossy-Woss of Wossington Park
PS. Russell Brand is innocent cos he was actually very polite and it was me who got all saucy, rude and risqué on the radio.
PPS. Who fucking cares anyway? The attack on Pearl Harbour got less headlines! Aren't the Daily Mail a bunch of malicious c***s?
PPS. This isn't really Jonothan Woss writing this, it's the evil Mustafa Goldstein, but it is really Russell in the actual magazine! Hoorah! Hoorah! And Hoorah again!
at November 27, 2008 1 comment:

The first ever "Hammies" at Burgh House 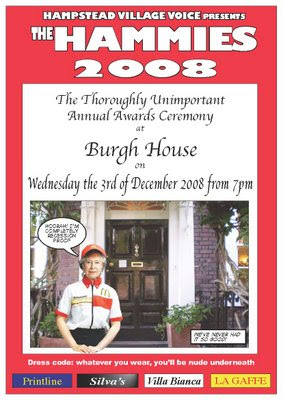 Wehey! The 6th and arguably best ever edition of the Hampstead Village Voice is at the printers and should be in the shops by Tuesday the 25th of November 2008, a whole week ahead of schedule. How very splendid.
Better still, we'll be celebrating by holding the fist ever Hampstead Village Voice Awards (THE HAMMIES) at Burgh House, Well Walk, Hampstead on Wednesday the 3rd of December 2008.
Alas Russell Brand, who makes his Hampstead Village Voice  debut in this glorious edition, will be in the USA until the 7th of Dec and is therefore unable to attend. (Ed. He really was going to come, honest, he told me himself, but he's filming and to be fair they're paying him more than we were not going to pay him) But we're not worried cos  we've not seen or heard the last of old Russy Wussy when it comes to his involvement with the Hampstead Village Voice to be sure.
Alas again! Lisa Stansfield's away too, so she can't come either...Darn! Nicky Horne's working that night on his show for Planet Rock....So we'll have to settle for a "sorry I couldn't be there video". Blast! George Graham's playing golf....Balderdash.... Emma Thompson's not returned my email... neither have Paul McCartney's "people"...Ricky Gervais told me to "contact his agent". Sod that, he only lives in Willoughby Rd? Ronnie Wood and Eric Clapton won't be there either...unless I bump into Ronnie again at the Coffee Cup .
Fuck it! Nobody like us - we don't care!
Well apart from good old Henry Kelly! He loves us and says he'll come along and I'm sure old Johnny Moss'll pootle along to add a little bish-bash-bosh to the evening. Oh and top author Tony Parsons is going to be there handing out the literary gongs. (Stop press:  I accosted Ricky Gervais as he jogged past The Wells Tavern today (25th Nov) and gave him an invitation. "I'll have a look", he said. What he'll have a look at is anybody's guess, but he seemed a little friendlier than when he first moved in a year ago. It would appear the laid back Hampstead air is relaxing his joggers loins somewhat.
Oh yeah...And Her Majesty the Queen will be at the door collecting tickets in her new uniform celebrating how American Hampstead has become.
Besides, the Hampstead Village Voice  prides itself on always placing principles before personalities (Ed. Yeah right, that's why all you f***ing do is name drop), so as long as you're there, that's good enough for us!
Love, peace and name-dropping galore,
Mustafa Goldstein
Editor and failed name-dropper.
PS. If you read this, you're invited! See you there!
at November 19, 2008 3 comments: