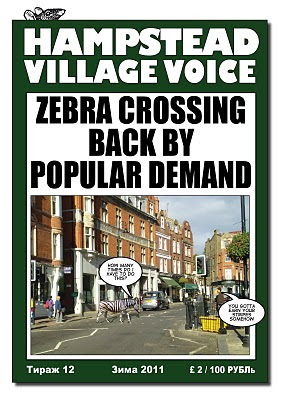 The new cover of the Hampstead Village Voice Edition 12 is at the shops now!
I'm sitting in my Bünker in Berlin and feeling dreadfully homesick. Oh for a pontless espresso at Café Scrooge or some Raisin Toast at the Coffee Cup. Berlin's all nice and fine but it just ain't home. You can take the boy out of Hampstead...
So destitute was I that I did the undoable and joined Farcebook where I've set up both a Mustafa Goldstein and Hampstead Village Voice page. I hate it. What a waste of time. Farting about trying to get the right pictures into the profile bit at the top of the page.
So feel free to look up Mustafa Goldstein on Farcebook - but, trust me, it's no replacement for the real thing, now available at your local news agent and Waterstones.
Surely the best £2 squid you ever spent! Hampstonian constitution... I should co-co!
Toodle Pip!
Mustafa Goldstein xxx
Editor in Hot-Pants.
at January 25, 2011 2 comments: 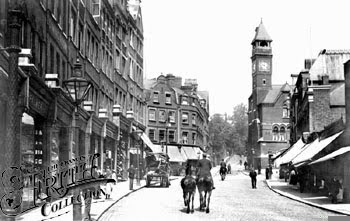 Everyone's on about Ricky Gervais so it's a good job I got an exclusive photo in tomorrow's Hampstead Village Voice [edition 12] which you can buy for only 84.00 Rubles from any Hampstead news agent.
Tony Parsons just twittered about how good Ricky was at the Globes last night and my mate Howard even phoned to praise his neighbour's irreverence to the great and the good.
Talking of Twitter, I'd thought I'd give it a go. Somehow less offensive than Farcebook, don't you think? Have a twit (is that what you say?) at Mustafa Goldstein at "Hampstonia".
Toodle Pip!
EMG.
Emmanuel Mustafa Goldstein.
Editor in Hot-Pants.
at January 17, 2011 No comments:

Edition 12 is at the printers! 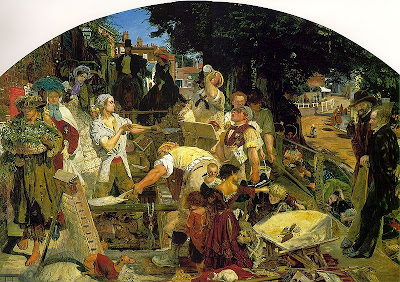 This splendid Ford Maddox Brown print of The Mount in 1860 appears in the 12th edition of the Hampstead Village Voice.
But enough of the culture! The new edition [in all Hampstead newsagents from 20th of January 2011] will also feature exclusive picture stories on Jonathan Ross, Ricky Gervais, David Baddiel, Cesc Fabregas, Ian Wright, Vanessa Feltz and Sadie Frost... I was thinking of calling it the Hello! Village Voice and just going all dumbed down and Farcebook-like on its arse but, actually, it's quite a mentally challenging edition.
Not least because of the Hampstonian Constitution - Part 1 and a potentially tricky attack on the PC Taliban [of modern day Airstrip One and the Union of Soviet Scamden Republics] presently crawling the street of Hampstead.
There's also a raunchy little story by sexy food critic Marcella Legief and mountains of art and nudism from Dr. Klaus Von Kunst. And those fellow sufferer's of Stressco will not be disappointed: there's no Tesco-Stressco but it is mentioned on pretty much every page. I really must find something else to right about - but we're still hoping to be sued by the supermarket giant [Ed. they wouldn't dare].
And then there's Wheelie Wevolting about the new residents of Hampstead, namely, the rats who are enjoying all that nosh pouring out of split, plastic bags all over the High Street. I know some of you find stories about wheelie bins a tad boring - but, like a terrier with it's teeth in Scamden's ankle, the Hampstead Village Voice will not rest until Hampstead is once again a clean and tidy place to live. So we're still pushing for a little common sense from them... (Ed. You've got more chance of winning the lottery!)
Back to the Hello! Hampstead Village Voice, I was tempted to add the balloon "Not a lot" from the mouth of Sadie Frost in a photo where an old class mate quotes the Beatles and asks, "Sexy Sadie, what have you done" but thought better of it seeing as she was with her son and from her perspective she does have a career (ed. unlike me) so it might have been hurtful [Ed. you're too soft].
More importantly, there's the wonderful A Hampstead Cat & Mouse Story by the lovely Peter Lund who sadly passed away recently. It's quite the sweetest thing I've ever read, plus my old mum really liked it and so will yours.
Right, must dash off and get to work on the new website... Yawn.
Toodle-Pip!
Mustafa Goldstein x
Editor in hot-pants.
at January 10, 2011 No comments: 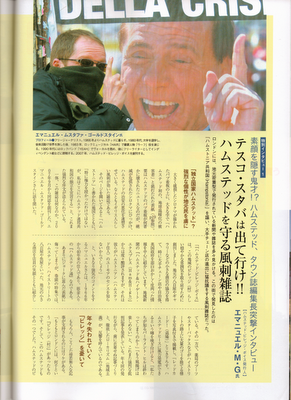 Although horribly unpopular in Airstrip One, Scamden and Slimegate, Public Enemy No.1, Emmanuel Mustafa Goldstein appears to have managed to gain cult status in Tokyo. Indeed, the well respected Japanese magazine Mr. Partner recently interviewed him about the Hampstead Village Voice and the Federal Republic of Hampstonia.
Of course, Mr. Goldstein's identity is a closely guarded secret and the picture above is of an Italian doppelgänger called Salvatore Tagliatelle and bares no resemblance to the real Mustafa G.
All being well, edition 12 will be out in the shops on Thursday the 20th of January and features, amongst other things, the first instalment of the constitution of the Federal Republic of Hampstonia. There are also exclusive local photo's of Cesc Fabregas, Ricky Gervais, Ian Wright, Vanessa Feltz, Jonathan Ross, David Baddiel and, most importantly, a long lost photo of our celestial editor in Chief, Bronco [John].
Plus all sorts of controversial nonsense.
Death be to Al High-Quaida and the Union of Soviet Scamden Republics!
Johnny Amalfi
pp. Mr. Honeka-Cohen
President of the Federal Republic of Hampstonia [land of the not so free]
at January 02, 2011 1 comment: