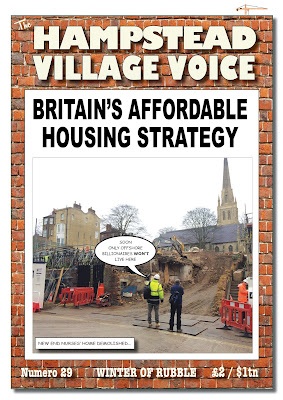 So much for sensible EU directives

If you can see this post through the London pollution then, may I ask, why isn't the Mayor of London doing what they do in Paris and order private citizens to stay out of their cars for a day? And why does the British government not apply EU directive 2008/50 which halts all major construction whilst air pollution is at a very dangerous level?
I'll tell you why. Because this country's full of selfish, ignorant, money-grubbing arseholes who put their comfort and industry before the breathing of fresh air, that's why.
"Children's lungs? Fuck 'em! We've got cash to make and huge SUVs to ponce about in!"
We may as well all be living in Trump's Brave New World... Oh shit, we are.

The good news is that the new Hampstead Village Voice is here to save our Hampstead spirits from the filth and corruption of Big Brother Trump and his new Airstrip One poodle Theresa Maybe.
If it's not too passé by then, we'll get Ken Pyne to sharpen his 'poodle bashing pencil' and furnish our new political correspondent Helmut 'Schmidty' Schmidt with a cartoon for the Spring edition, which will be out in May, Theresa.
That's if a Trident missile hasn't accidentally bombed Florida and caused all out war between Britain and the United States. Oh wouldn't that be a laugh! Imagine it: our armed forces accidentally bombing the USA.
As Mr. Withnail once famously yelped from the front seat of an old Jag, "Go and get your new Hampstead Village Voice now darlings... you haven't got a chance!"

WINTER EDITION AHEAD OF SCHEDULE!

HURRAH! The Winter Edition (HVV29) of the Hampstead Village Voice has, after much toil, flu and caffeine, been sent to the printers. Here's its intestines.... It should be out before the 1st of Feb 2017 if Trump's 'TOTALLY BIGLY DÉJÀ VU' (page 34) hasn't nuked us all by then.

Enemy of Big Brother - more than ever! 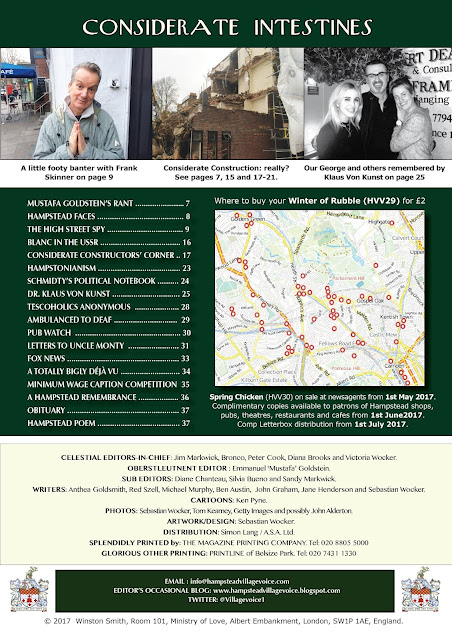