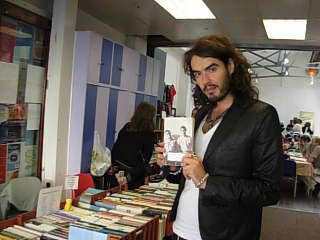 Last seen in the Hampstead Community Centre at Bruce & Carol's bookstall and on pages 3, 15, 25 and 26 of the current edition of Hampstead Village Voice, Russell Brand poses with a booky wook.
Haven't seen old Russy Wussy about for a bit - not since bumping into him in that Stressco hell hole, then dashing off to Xabia [Spain] to start work on my book.
He asked me what the book was about but I wasn't about to spill the beans on the greatest literary idea since Romeo and Juliet or Nineteen-Eighty-Four was I? Not that I don't trust old Russ, it's just not the done thing to tell people what a book's about till it's written, is it. It might scupper the thing and we wouldn't want to be doing that.
Glengarry Glen Ross
So now it's back to the business of getting edition 7 of the Hampstead Village Voice under way. I actually use the film Glengarry Glen Ross as a training exercise before going out and selling advertising. It's time to "Put that coffee down", get out the "Brass Balls" and "Always Be Closing". Especially with all this economic downturn malarky everyone's on about? "Yeah, I used to be in sales... It's a tough racket..." Bullshit! I'm going to go out tonight and close a five year contract with Oldschidt & Howler, Stressco and Star*ucks - "They're out there just waiting to give you their money... Are you going to take it? Are you man enough to take it?"  Says Alec Baldwin to Jack Lemon et all in what has become the Hampstead Village Voice sales training and motivational DVD. Damned right I am! Charge!
Le Petite Crime
More importantly, Bessy the Hampstead Village Voice bicycle's had her gorgeous plastic basket nicked off her from out side Barclays Bank in the High St. We believe an employee recently made redundant by the Barclays credit crunch cull may have nicked it in order to clear his desk. Either that or it's the work of some jealous fiend who despises the Hampstead Village Voice and is attempting to sabotage our efforts to bring enlightenment, love and bohemia to the rapidly declining parish.
Hampstead Village Voice - Le Petite Crime Sheet No.1
Alas there have been several such instances of theft and sabotage in the last year including:
a) The blatant theft of our advertising board outside Hampstead Tube Station
b) The ripping off and chucking into the street of our advertising board outside the Village Newsagents on Heath St.
c) The letting out of air from Bessy the bicycle's rear wheel in Flask Walk.
d) The unsolicited use of our advertising boards by The Evening Standard, The Guardian and The Economist.
e) The theft of Bessy the bicycle's plastic basket.
We do think we allegedly smell an alleged conspiracy from one or all of the alleged following:
i) The CIA
ii) Scamden (various departments)
iii) Stressco
iv) Little Hoodie Wankers
v) Pissed off Security van driver
vii) Der Himm Und Heil Hitler Express
viii) M15
ix) The Evening Stan'rd, The Gruniad, The e-Communist
Of course this is all alleged hypothetical hogwash and it may just be some saddo has nothing better to do with their time than piss on the Hampstead Village Voice parade but let's face it, we are living in the blasted dark ages so what do we expect?
Is it me or is the world truly crap right now?
Tra la la and toodle pip!
Mustafa Goldstein x
Enemigo Del Gran Hermano
(Enemy of Big Brother)
at January 14, 2009 3 comments: