Editor Gets Scrunched by BID Chairman. 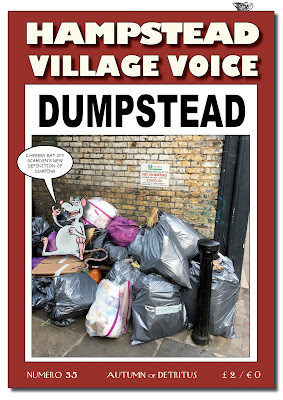 Albeit the autumn issue focusses mainly on rubbish of the Veolese variety, there are also two exceptionally feisty reports on the Hampstead Village BID Ltd which, were you to ask local businesses what they thought of it, they'd almost certainly answer 'Rubbish!'
Well, at least 70% would. We know this because a) despite grandiose claims from Camden Cllr. Richard Olszewski in the Ham&Eggs that "a majority of businesses" voted for the thing, in reality only 30% of the eligible 243 businesses actually did and b) we conducted a poll of 100 businesses which resulted in over 75% being vehemently against the thing. And when I say vehemently, I mean as in Gauls versus Romans. So we can't wait for the next ballot now everyone knows what it does... or rather doesn't do.
You see, the main story in the current edition is about how a) the BID's chairman violently scrunched this magazine's editor's hand and phone in Back Lane last June and b) the whole BID thing is an utterly pointless exercise. Unless of course you're the BID's CEO who receives a stipend of up to £40k a year. What the chairman gets out of it other than getting to physically abuse local rag editors or going down in everyone's estimation is anyone's guess. Read on...
Toodle Pip!
Emmanuel 'Mustafa' Goldstein.
Editor (bruised). 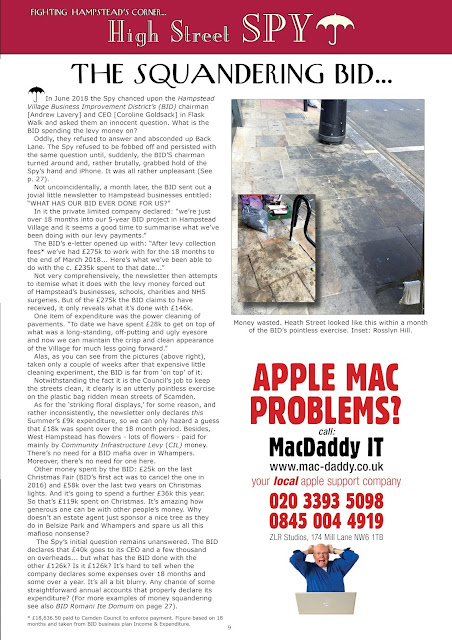 The follow up story, which is almost certainly twice as good, is in the Hampstead Village Voice, at newsagents and splendid bookshops now for £2.