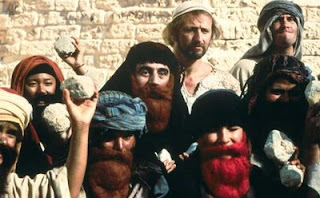 One of these bearded "gentlemen" is Mustafa Goldstein's Auntie Doris from Wuppertal who's going to take him to a damned good stoning.
Cor Blimey and Jehova be praised I've bloody well had enough of Hampstead, so I'm off. Bleedin' sick of the place if you really want to know. Well... So would Jehova be if he published the Hampstead Village Voice and every time Jehova walked up the High Street some infidel chucked in their blooming t'penny's worth.
Of course I love Hampstead - I love my mother too, doesn't mean I want to live with her day in and day out, does it! Even Jehova knows that! So I'm out of here and off for a spot of stoning in Galilee - Apparently it's a local boy this week and all I can say is he's got it good compared to what I've had to put up with from you lot!
Enjoy wallowing in heaps of bin-liners and spilt umska whilst I'm gone. Some of you actively seem to like it - No surprise the word Hamp-stead derives from Pig-Farm.
Snort Snort and up Jehova!
Toodle Pip!
Mustafa Goldsteinxxx
Un-popular Peoples Front of Hampstonia.
at April 05, 2009 No comments: