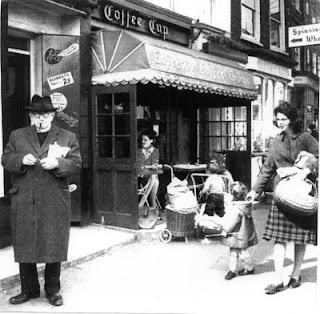 REUTERS....
.....Hampstead waits with bated breath after the attempted military coup d'etat of Hampstead Village Voice central office (above) in the early hours of Monday morning.
....Angered by relentless ridicule, and having already stolen the Hampstead Village Voice A-Board from outside Hampstead tube station earlier this summer, Scamden's Junta-militia led by Himm & Heil leader Jiff "Martini" Bore-mann  (pictured above in a previous life as a pot-smoking  clergyman miraculously plotting the coup d'etat some 50 years ago) stormed the HVV offices at exactly 1.05am yesterday morning in an attempt to over-power Mustafa Goldstein and prevent Edition 5 of Hampstead's most scurrilous magazine reaching the shelves.
....Although we have no idea yet as to whether the coup has actually succeeded, we do know that the printing press in Brimsdowne has had a large Spaniard thrown into it and much blood and guts has resulted
....As you read, fighting continues and only time will tell as to whether the Hampstead Village Voice, the HPPF and edition 5 will prevail against the evil Bore, Scamden's Junta and it's hideous anti-tea and biscuits propaganda machine....
Stand by for further news....
at September 08, 2008 No comments:

The next (Autumn) issue's on it's way and Wowah-Weewah what an issue it's going to be! As a purely precautionary measure we have taken the step of adding a Parental Guidance sticker on the front page. This is partly due to the rather hot photo on page 28 which in modern day Neo-con, Anti-Sex-League Britain might just shock the Jones's a bit. They don't like it up 'em those Jones's! But mainly because it's bound to sell more with an explicit content label on the front!
The good news to celebrate the recession we've lowered the price from £2 squid to only £1.50 a copy! How nice are we!
There are also two faba-dooby-tastic interviews with Lisa Stansfield and George Graham and we've got loads of hot stuff about Hampstead's new nudist colony by Klaus Von Kunst, some rather sexy pics in Bilov's Sexytime and the definitive guide for estate agents suffering the 'credit crunch'. Plus some brand new and well justified slagging off of Scamdengrad and their botch jobs in Church Row and Perrin's Court. Best of all, we've hired Tony Soprano to answer your letters like only he can. Correction! Best of all we've come up with a cunning plan to eliminate traffic wardens.
There's no malice aforethought in the timing of edition FIVE's release which is the 11th of September 2008.
We were aiming for the 8th of September but when I received the test proof back from the printers, we noticed that a picture of fellow Hampstonian, George Graham, who'd so kindly given of his time for the Autumn edition, was a little too on the orange side for our liking. So off back to the printers it's gone and will now be in the shops from September 11th.
Ah the joy of technical hitches! Keep us on our toes and keeps 'em keen on the old High Street where apparently news agents are getting bored of the question "when's the next issue out?" Have they not caught on that, in the name of Anarchy and dishevelment, our beloved Hampstead Village Voice only comes out when it's bloody well ready - which just happens to be with the change of the seasons! Think yourselves lucky we still have four seasons in Hampstead. If we were based in Spain or somewhere they only really have two seasons, you'd only get two a year!
Could this be the best ever edition? You tell us!
Love
Musti xxx
Emmanuel Mustafa Goldstein
Enemigo Del Estado
at September 01, 2008 No comments: