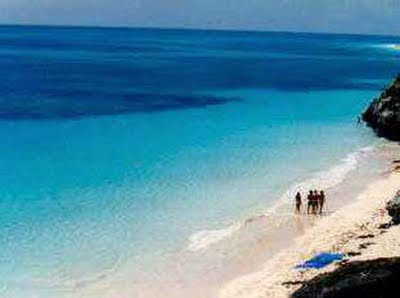 The water really is this clear. Lovely!
Yes, the only thing this entry has to do with Hampstead is that I am writing it from my hotel bed whilst wearing my Hampstead Village Voice T-Shirt. I am staying at the very splendid Hostal San Telmo run by Maria, her dad and their two dogs. Nice little pool and 4 minutes from the beach. What more could one wish for at €30 a night!
Oh, and I took the 46 bus to Palma today. Yes there really is a 46 bus that goes through Palma and not only that, the driver played The Best of UB40 really loudly all the way there - I mean, really loudly. Quite mental. Imagine the driver of the 46 in Hampstead doing that? Never!
Viva España, Viva Hampstoñia!
Mustafa Goldsteinxxx
Editor in boxer-shorts.
PS. Do not order pizza in Mallorca. It's shit. The pasta's good though.
at April 30, 2011 No comments: Hampstead High Street by Tim Garrett
The current edition of the Hampstead Village Voice - temporarily re-named thePramstead Village Voice - is currently available at all good Hampstead newsagents.
Oh and we've got a lovely new website. Do go and have a quick peak : http://www.hampsteadvillagevoice.com
Incidentally, I'm off. Had enough. But don't worry - just a week in Palma to rejuvenate and get going on my book.
Well, there's only so much one can write about Hampstead, her prams and her pillar-boxes so it's time to venture into the world of the 'proper' writer.
Watch out George Orwell, here I come! Oh alright, George Formby.
Toodle Pip!
Emmanuel Mustafa Goldsteinxxx
Editor on holiday... well, sort of.
at April 25, 2011 No comments:

The right to feed your baby... 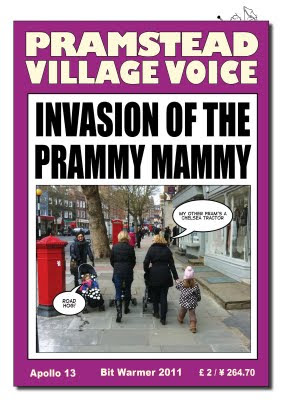 Nothing to do with breastfeeding - the front cover of the Pramstead Village Voice.
I received a phone call this morning: "have you seen page three of the Camden Journal"?
I popped off to get a copy and there was a story by Tom Foot about a woman who was asked to leave the King William IV for breastfeeding her child. I ask you, what has the world come to when a woman is thrown out of a public place for fulfilling the most basic of human needs - feeding a baby?
According to the story there were three men at the bar who decided to quote the front page of the Hampstead Village Voice whilst jeering, 'Invasion Of The Prammie Mammies' at her whilst waving a magazine in the air.
The story goes on to mention our splendid 'three page spoof photo feature on Pramstead', which has an innocent poke at 'the recent perambulator proliferation of Pramstead'.
Nowhere in the story does it mention the noble art of breastfeeding. Besides, as any Prammy Mammy will tell you, prams and breastfeeding are two completely separate subjects. 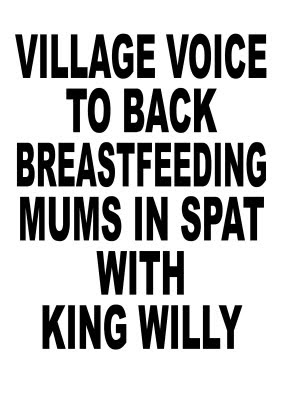 In case there was any doubt...
The Hampstead Village Voice would like to make it clear it backs a mothers right to feed her child in any public place at any time of day or night and strongly suggests the King William IV offers a sincere apology for its inappropriate decision to interfere whilst a mother fed her child.
A spokesman for the Metropolitan Borough of Hampstead said, "I don't know what the fuss is all about, it's all just a storm in a D cup".
Toodle Pip,
Mustafa Goldstein,
Editor in hot-pants
at April 21, 2011 No comments:

God Save The Queen composed in Hampstead?

We urge you all to go and buy the single God Save The Queen by The Sex Pistols this week to ensure it goes No.1 in time for the Royal Wedding.
According the Heath and Hampstead Society website, The Sex Pistols composed God Save The Queen at Johnny Rotten's flat in New Court off Flask Walk. Whether it was actually written in the flat or just whilst Mr. Rotten (Ed. You're having a laugh) lived there, is open to speculation. What is certain is that if you purchase the single for a mere 99p from iTunes it'll chuck a few pence Johnny's way and might even go to No.1 ensuring God Save The Queen will be the musical back drop everytime they show the wedding in years to come. And wouldn't that be splendid!
Toodle-Pip!
Mustafa Goldstein x
Mustafa Goldstein
Editor in Bondage
at April 18, 2011 1 comment: