IT'S IN THE SHOPS! 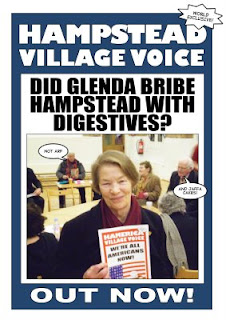 This is the already unlegendary poster promoting the Spring 2009 issue of Humpsturd's least favourite magazine...
Hoorah! The Spring Clean edition of the Hampstead Village Voice is out NOW!
Got up early (ish), had a coffee at Cafe Sneéro, then met he known only as "The Elf" for lunch at La Gaffe and it was off to the printers in Brimsdowne in Herbie-The-Hampstead-Village-Voice-Mobile A.K.A. the Elf's Volvo estate.
He wasn't a happy little Elf by the time we got to his favourite barber shop - where we usually stop off so that he can get his hair cut for £8. Well, Hampstead's so pricey these days- and Elf's aren't paid all that well. Anyway - it was Thursday and lo and behold they still have half day bloody closing up there in Middlesex! I thought half-day closing went out of fashion with Maynard's and Fowler's in Flask Walk! But obviously not in Brimsdowne.
So with Danny Baker blaring through the Elf's Volvo's stereo we manage to deliver some 1,300 copies of the Hampstead Village Voice to newsagents and bookshops  in Hampstead, Saff End Green, Belsize Park and West Hampstead before retiring to the Rosslyn Arms for a pizza and a beverage. I drank a lime and soda and he drank several bottles of Becks with ice and a few Café Creme cigars: well, he ain't very Elfy, is he.
Chop-chop! off you go and purchase your Hampstead Village Voice immediately! The local economy depends on it!
Mustafa Goldstein
xxx
A.K.A.. Richard Nixon Jnr..
at March 25, 2009 3 comments: 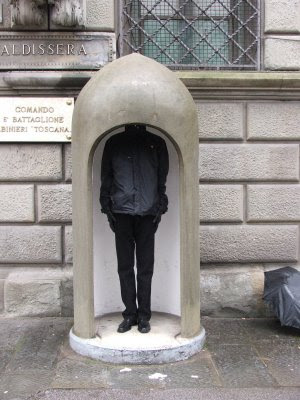 Above: Confused by his Anglo-Arabic-German-Jewish ancestry, Hampstead Village Voice Editor, Emmanuell "Mustafa" Goldstein decides to join the Italian police. Note the illegally dumped black refuse bag (bottom right). Ahhh - just like home!
Captain's Log: stardate 23-03-2009. Someone said it was High-tie-m I got a proper job and as we can see from the picture above,  my new position of Il Guardia Del Firenze a la Caribinieri has been keeping me very busy indeed. Some might say the fact that I now earn €21,000:00 a year for standing in a concrete podium for eight hours a day is a complete waste of tax-payers money. Not a bit! It's money well spent, not least because it will stop me producing that blasted magazine that gets up everybody's noses. Besides, it's Italian tax-payers who'll be coughing up the pasta, so what do you care?
Incidentally, the allegedly scandalous 7th edition of the Hampstead Village Voice features Oscar winning member of Parliament Mademoiselle GLENDA JACKSON (Oooooh!), NICKY HORNE on JOHN LENNON (Blimey!), HENRY KELLY (Corrrr!) JON MOSS (Wehey!), ADNANDUS DYZANTAE (Ahhhh!), THE MIDFIELD GENERAL (Arrrghhh!) and KLAUS VON KUNST (Whoops!) and will be available for the whopping, post-recession price of £2 whole squid from the following outlets as of April 1st 2009.
Toodle Pip and arrivederci,
Mustafa G.
xxx
PS. My new boss, Snr. Il Ducci-Generalissimo Berlusconi assures me it'll be a very good read.
at March 23, 2009 1 comment: 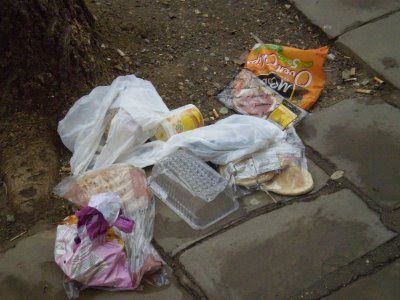 Charming! Is Hampstead becoming a Khazi? Listen up restaurants, businesses and residents: it's time to start taking responsibility for our rubbish or face the Hampstead Village Voice Gallows of Shame. (This horror-show was recently dumped outside a business in Downshire Hill - what are they on?).
Hurrah! Edition 7 of the Hampstead Village Voice will be at you Hampstead news agents by the 1st of April 2009, is back to it's normal price of £2.00 (well, the recession's over init) and includes a FREE CD with every purchase! Unless of course you live in our Satellite State of Belsize Park in which case you can purchase your copy in Belsize Village or outside the tube station. Residents of the Soviet Republic of West Shamstead will have to walk all the way up West End Lane and buy their copy from Mr. Mystery because, frankly, all the other news agents in West Hampstead were so unenthusiastic and have so little Joie De Vivre that we can't be arsed with them any more. We wonder whether some of these people actually alive?
Meanwhile, I have been approached by several Hampstonians of late who are convinced the Hampstead Village Voice ought to come out at least monthly and that if it did this would in some way or another equal “progress” of some sort.

What utter poppycock! My dear Hampstonians, nothing could be further from the truth. For starters it would mean getting up very early every morning. How does that equal progress? After all, sleeping in, blissfully stretching and yawning whilst the rest of London crams into a carraige on the Northern Line is surely the most glorious of luxuries which only the foolish would forsake.

Besides, the whole ethic behind this thing is that it’s vehemently anti-rat-race. If the Hampstead Village Voice had a mission statement (which it hasn’t) it would be “Nice and easy does it”. What’s the rush?

Indeed we pride ourselves that no Roman calenders or alarm clocks are required in the production of the Hampstead Village Voice. It grows and evolves as naturally as an oak tree on Hampstead Heath and rusheth not to the foolish tempo of Governments, banks and corporations.

The Beatles had the right idea when they wrote the song  I'm only sleeping (Revolver) which is right on the button :
"Everybody seems to think I'm lazy, I don't mind, I think they're crazy.
Running everywhere at such a speed - till they find, there's no need..."
Splendido!
Toodle pip!
Musti Goldsteinxxx
PS. Keep Hampstead Tidy!
PPS. Litter Highate at will!