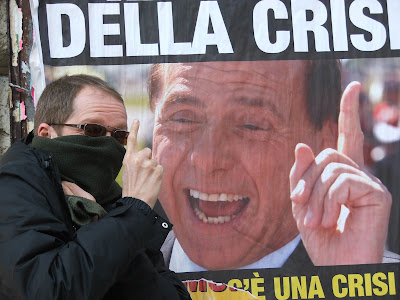 Shut it Mr. Berlusconi. Where are your AC Milan now? Looks like Jose Mourinho's Inter-Milan are stealing the limelight from your media-state empire. Barca might play pretty football but after Messi got away without a yellow twice then Motta was sent off for nothing, I decided to cheer on Inter and a 0-0 draw. It ended 1-0 to Barca but Inter prevailed and well done them. We'll be opening an Hampstonian embassy in Barcelona this summer and shall delight in reminding the Catalans that they couldn't get 2 goals past 10 men at the Nou Camp. Isn't humility a wonderful thing amigos. Forca Hampstonia!

Is it me or did someone turn the volume down? It's when you travel to somewhere like Berlin that you realize how loud Hampstead (London, Britain, Airstrip One, Oceanea) has become. I sometimes think we're living in a blasted kindergarten and someone gave the kids a load of drills, saws and sirens. Even taking the S-Bahn from Hamburg airport, I noticed a big difference in noise pollution compared to the Piccadilly Line. Not only are the trains in Germany quieter, but there are less announcements and the beeping when the doors close isn't so shrilling. Is shrilling a word? Don't I mean shrill? I'm losing vocabulary in my old age. Anyway, it feels like London has it's volume turned permanently onto 11 whilst Hamburg is a very pleasant 7. Just right for a city.

I've been in the centre of Hamburg 8 hours and haven't heard a single police siren. Heaven! Not a builder in site. Joy! And leaf-blowers? what are leaf-blowers? It's pretty chilled around here but not in the least boring. I'm in a hotel around the corner from "Schulterblatt" in the "Schanzenviertel" a very cool area my girlfriend once referred to as "The Twelve Monkeys". It's all a bit anarchistic and graffiti'd but not in the least bit menacing. Just cool.

Having watched Barca fail to get 2 goals past a 10 man Inter-Milan (A good thing too, after that cheating twat Sergio got Motta sent off) i popped round the corner for a very pleasant bowl of pasta and an apfelschorle (apple juice & soda) on the Schulterblatt. There were a few Italians honking their horns (volume: 10 - but for good reason, so acceptable) and everyone was sitting outside drinking beer and Bionade, a non alcoholic bevvy that's become all the rage in Germany.

So off to Berlin tomorrow to see my old mum and no doubt watch Fulham v Hamburg in the evening with my old drummer friend and Hampstonian Ambassador to Berlin, Archie. Who knows, I might eventually even get around to starting the next edition of the Hampstead Village Voice a task that feels increasingly like doing a weeks worthof homework on a Sunday night. Oh well. Orwell that ends well.