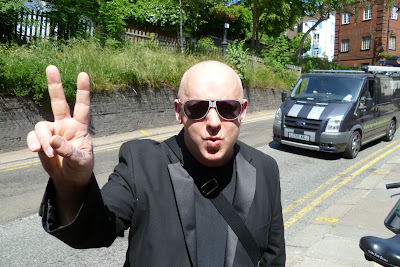 Boy George very kindly poses for the Daily Hate Mail, a new sub-section of the Hampstead Village Voice which serves up some resentful bilge a la the most hideous of all the national newspapers. Yes the Daily Mail really is the most appallingly small minded publication. All it ever seems to do is slag off individuals like Boy George and Russell Brand for no reason or pick on some immigrant for moving into a two up-two down in St. John's Wood. Why shouldn't immigrants live in St. John's Wood or indeed Hampstead? And why shouldn't they claim benefits? Don't have a go at the poor immigrant for accepting a few squid within the limits of the law: have a go at H.M. Government if you're going to have a go at anyone. Oh, no, of course not. The Daily Hate Mail finds it easier to bully individuals than accuse H.M. Gov of being somewhat slack with everyones cash!
In the Summer Edition of the Hampstead Village Voice, the Daily Mail gets a taste of it's own medicine and is slagged off right and proper for being the fear mongering, xenophobic load of bollocks it is! What a horrid little paper. Did you know it supported the Nazis before Britain went to war with them? Yes it really did. That's how ghastly it is! Although it now claims to be Nazi free, it's still just about as mean as you can get without actually being a Nazi.
Also in this most glorious edition: Richard Madely buys the Hampstead Village Voice... or does he? There's the first ever picture of [almost anonymous] Mustafa Goldstein sporting an Arsenal Yamulka in Jerusalem; John Alderton says hello; Tony Parsons writes a bed time story; Klaus Von Kunst rants on about the Zebra Gallery and his uncle Günter; Ranjit Bolt does the Hampstead Rap; Sandy Markwick shares a little Hampstead History and the campaign to save the Duke of Hamilton gets full coverage... Oh, and the results of the Hampstead Village Voice Awards are published on the centre pages!
Bleedin' bargain! So off you trot to your local news vendor or Waterstones and get yourself a copy. A whole 2 squid? Yes, you're worth it!
Emmanuel Mustafa Goldstein x,
Berlin. 22.07.2010
at July 22, 2010 2 comments:

SUMMER VOICE IS OUT NOW!!!

It's a miracle! The weird, wonderful and hard hitting Hampstead Village Voice is out this Saturday! Not only that, the Hammies Awards will take place at the Rosslyn Arms on Wednesday (7:30pm 14th July). I'm completely knackered but I think we've cracked a rather good edition this time around. Plenty of names to drop (Boy George, Russell Brand, Richard Madely, Tony Parsons and The Queen - well, she isn't in it but I thought I'd drop her name anyway) and some properly right old juicy stories.

Not least the continuing saga of the Duke of Hamilton.

I popped into see Woody and Mary today and they're livid with Hampstead. Not sure why cos all Hampstead wants is to keep the pub that's been there since 1721 a pub. But the Woody's have been like family to me over the years so I'm not about to go slagging them off but disagree strongly with Woody over the future of the pub. He doesn't think it has a future as a pub. I do. And so do alot of others. Nothing personal old boy - just don't like to see Hampstead pubs closed and turned into unaffordable housing for rich people. Nothing against rich people either. After all, I'd like to be one one day but that doesn't mean I'd want to spoil the fun for everyone else. And that's what we've had at The Duke for years. Fun! And lot's of it. Long may it continue and I'm pleased to report there are plenty of bidder's to take the pub over and give it a new lease of life. As long as Scamden and the owners (Wellington Pub Co. A.k.a. the Reuben Bros) don't get greedy, we'll still have a boozer there this time next year. It's just like an Ealing comedy init!