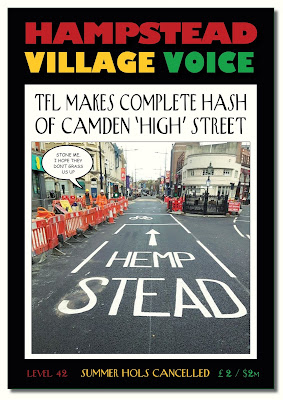 No, it's not photoshop. They actually did this!
On the 30th of March, a fellow calling himself the Diamond Cockney Geezer sent us a picture of this simply magnificent Transport for London botch job. At first we thought it might just be a premature April fools jape. Yet, after making enquiries with both Camden and TfL, it became clear this was indeed a genuine cock up.
Yes, they actually did write 'HEMPSTEAD'. They even appeared to have got the 'S' the wrong way around so, whatever it was they were smoking, must have been pretty potent stuff!
In any case it was simply too hilarious a gaffe not to have on the front cover and we all need some cheering up, so here it is in all it's Hæmpstead glory!
Better still, the summer edition is on it's way and will be available at a limited number of local shops this Thursday 25th of June then free online from the 1st of July 2020.
Viva Hæmpstonia!
Emmanuel 'Mustafa' Goldstein.
Editor in dishwasher.
at June 22, 2020 No comments: 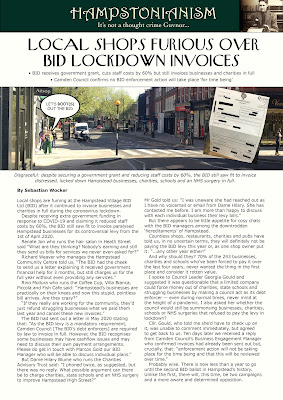 Local shops are fuming at the Hampstead Village BID Ltd (BID) after it continued to invoice businesses and charities in full during the coronavirus lockdown.
Despite receiving extra government funding in response to COVID-19 and claiming it reduced staff costs by 60%, the BID still saw fit to invoice paralysed Hampstead businesses for its controversial levy from the 1st of April 2020.
Renate Jon who runs the hair salon in Heath Street said “What are they thinking? Nobody’s earning and still they send us bills for services we never even asked for?”
Richard Weaver who manages the Hampstead Community Centre told us, “The BID had the cheek to send us a letter explaining it received government financial help for 3 months, but still charges us for the full year without even providing any services.”
Rino Mollura who runs the Coffee Cup, Villa Bianca, Piccola and Fish Cafe said: ‘‘Hampstead’s businesses are practically on their knees and now this stupid, pointless bill arrives. Are they crazy?”
“If they really are working for the community, they’d just refund struggling businesses what we paid them last year and cancel these new invoices.”
The BID had sent out a letter in May 2020 stating that: “As the BID levy is a mandatory requirement, Camden Council [The BID’s debt enforcers] are required by law to invoice in full. However, the BID recognises some businesses may have cashflow issues and may need to discuss their own payment arrangements. Please do get in touch with Marcos Gold our BID Manager who will be able to discuss individual plans.”
But Dame Hilary Blume who runs the Charities Advisory Trust said: “I phoned twice, as suggested, but there was no reply. What possible argument can there be to charge charities, state schools and an NHS surgery to improve Hampstead High Street?”
Mr Gold told us: “I was unaware she had reached out as I have no voicemail or email from Dame Hilary. She has contacted me before. I am more than happy to discuss with each individual business their levy bills.”
But there appears to be little appetite for cosy chats with the BID managers among the downtrodden ‘hereditaments’ of Hampstead.
Countless shops, restaurants, charities and pubs have told us, in no uncertain terms, they will definitely not be paying the BID levy this year or, as one shop owner put it: “...any other year either!”
And why should they? 70% of the 243 businesses, charities and schools who’ve been forced to pay it over the last four years, never wanted the thing in the first place and consider it rotten value.
I spoke to Council Leader Georgia Gould and suggested it was questionable that a limited company could force money out of charities, state schools and struggling businesses by making a council act as its debt enforcer — even during normal times, never mind at the height of a pandemic. I also asked her whether the council would still be summonsing businesses, charities, schools or NHS surgeries that refused to pay the levy in lockdown?
Cllr. Gould, who told me she’d have to check up on it, was unable to comment immediately, but agreed to get back to us. Ten days later we received a reply from Camden Council’s Business Engagement Manager who confirmed invoices had already been sent out but, crucially, that: “enforcement action will not be taking place for the time being and that this will be reviewed over time.”
Probably wise. There is now less than a year to go until the second BID ballot in Hampstead’s history. Unlike the first, there will, this time, be two campaigns and a more aware and determined opposition.


Editor's tuppence worth. The Hampstead Business Improvement District Ltd (BID) showed it's true colours during the coronavirus lockdown when it decided to bill struggling Hampstead shops, charities, restaurants, schools and pubs for services it was not providing and which most of the shops didn't even ask for. It even billed charities, New End state school and the NHS surgery, Keats Practice, in Downshire Hill. The BID is a blot on Hampstead's land scape and has to go.

We have just received this update from Hampstead SNT.

I thought you might be interested to see our sergeant’s update on the disturbance on Hampstead Heath yesterday evening. This was a much nastier incident than I’d understood initially and I didn’t appreciate the extent of the disorder until I read John’s update.  John was one of the first officer’s on scene with other SNT officers. When the crowd turned on them they had to call for back up, involving around 30 officers, some of whom were called in from other areas.  I understand it took about an hour and a half to restore order. John himself was injured but thankfully not badly and he is back on duty today, having been on shift until 4.00 this morning.

We are aware that there has been a lot of media attention relating to an incident that occurred yesterday evening on Hampstead Heath. We would like to provide further details relating to this incident and the subsequent five arrests made.
Police were made aware at 1800pm of a large group of approximately 150 young people gathered on Parliament Hill Fields. Our initial concerns were non-adherence to social distancing guidelines. A number of individuals within the group were consuming alcohol. A small group of officers attended to engage with the group. During this initial attendance, a robbery was reported and an allegation made that individuals within the larger group had stolen an electric scooter.  A suspect was detained but officers asked for further police support due to the number of young people present and the increasingly hostile and obstructive behaviour displayed by some members of the larger group.
Officers arrived to assist and while monitoring the crowd at a short distance, a fight broke out among a small group of young females. Several individuals were seen throwing punches, kicking parties on the ground, and pulling hair aggressively. Officers intervened immediately, but became surrounded and faced a difficult challenge in calming the crowd. A number of other fights erupted within the large crowd despite police intervention. Officers requested further support.
While the aggressive and violent behaviour began amongst themselves, many members of the group became hostile and aggressive to officers that were trying to prevent further violence. Five police officers were assaulted including being slapped, punched, pushed and spat on. Officers on scene who arrived to help used reasonable and proportionate force to try and prevent crowding and a further breach of the peace.
In total, five young people were arrested for the following offences – four for assaulting an emergency worker and one for failing to leave a dispersal zone.
Three females and one male were charged. They will appear in court for assaulting police & common assault at a later date.  A young male was released under investigation.
We would urge young people and their parents or guardians to remember there is still a requirement to adhere to social distancing, not to gather in a group of more than 6 people not from your household.
Hampstead Heath is a welcoming open space for local residents and visitors. This will not change.
For those engaging in anti-social and violent behaviour in our community, it will not be tolerated. Do not engage in violent behaviour towards one another. Do not engage in violent behaviour towards emergency workers, it is not acceptable.