EDITION THREE IS IN THE SHOPS 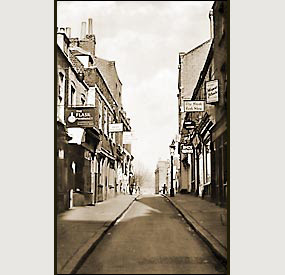 These days you can't buy a single fag in Fowlers; Maynards has gone forever; The Owl & The Pussycat is but a mere memory now, yet Flask Walk's still there...But for how long? Would we be surprised if the council built a dual carriage way here? They seem to be spending thousands on digging up roads these days. There's hardly a road in Hampstead that hasn't got some construction company drilling away... back-handers? Hmmmm...
Edition 3 of the Hampstead Village Voice is in the shops, so off you trot and buy your copy, if only for the Hampstonian's View of the World centre page poster by Helen Cusack. It's Pop-tastic!
at February 23, 2008 1 comment:

Edition three is at the printers! 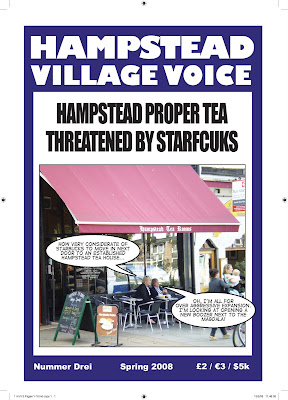 Oh Yes! It's time for the third edition of Hampstead's best (well, only) satirical magazine. And it's going to be in all your favourite newsagents before you can say Buggery Basin, or at least by Monday the 25th of February, well ahead of the scheduled 1st of March release date!
This edition features a free, must have poster, The Hampstonian's View Of The World; exclusive photos of the Express Dairy; Tesco Stressco (the sequel); zebra crossings; moody fishmongers; the Wharrie Shelter, 'Ampstead 'Arry, Clive Barker; The Bronco Files (featuring Peter Cook); A trip down mammary lane; Leaf It Out Guvnor (Part II); Hampstead Favourites (The Excellent Health Company); Sexytime (feat. Our very own Angelina Miele); Fruit & Veg; Travel Section (Escape From Hampstatraz); Hampstead Faces; The Gentle Art Of Being A Pub Landlord; The Hampstead Crossword; Heathen; French Letters and News Agent Of The Year Award 2007. Plus your non-essential Rather Useful Page.
Corr Blimey! This one's a cracker! What more could anyone possibly want?
I must admit I'm terrified of old ladies approaching me in the street and yelping at me about the FCUK corporate logo being used on the front cover of edition three. The question is, can FCUK be offensive after it was brandished by a huge clothes outlet everywhere for so long? Is it in context? Is it satirical? Is it a bit rude? Well, I won't be around to find out! I'm off to Europe and civilization for a bit, so old ladies, you can put those umbrellas away for a bit.
Toodle Pip!
Mustafa Goldstein
Editor in Exile.
at February 19, 2008 2 comments: