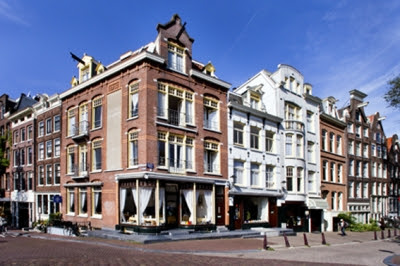 Although, I have just returned from Amsterdam, I didn't stay at the Weichmann Hotel. At least not on this visit, but it was there in 1979 at the tender age of fourteen I met up with a rather wild rock'n'roll band from New York called, wait for it... Stumblebunny, and my life was to take something of a dramatic turn. But enough of the memoirs - which, if ever I sell the Hampstead Village Voice for a princely sum - will be published whilst we're all still all alive.

Meanwhile, running two magazines (and a locals loyalty card scheme) leaves little time for writing memoirs - let alone novels, but it will be done! I do love Hampstead and the mags, but have a feeling in my loins that there are bigger fish to fry in the not too distant future.

My plan is to sell the magazine empire (Ed. Errr, 14 newsagents, a supermarket and a book shop. Empire?) whilst continuing to only edit the Hampstead Village Voice on a semi-relaxed, part-time basis thus allowing me to write a thrilling book or two or even three.

What was it someone said about God laughing at our plans?

More importantly, I shall be attending a small private concert tonight with some guitarist geezer and his mates. Eric somebody or other... Clackton? Clapham? You know, that bloke who ran off with George's missus. I'm even hoping Gringo Starr might also be there as, if he isn't, I'll have something to be disappointed about (Ed - How very Ringo of you).

In the meantime, I better had go and humbly check the poster-boards haven't been hijacked by the Daily Torygraph, Financial Crimes or Himm & Heil Express... Splitters!

Base, Hampstead, London, Airstrip One. 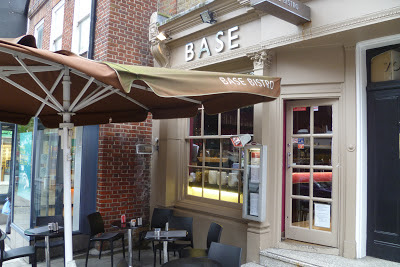 Base - A splendid lunch buffet

Yes, my New Years resolution is to spend money only at independent businesses in Hampstead throughout 2013. No Stressco, Scrooge, Sneero or Arsefcuks for me. I'm going to prove it's possible with my Hampstead Village Card, dammit! Join me fellow Hampstonians or continue to contribute to the Chain-store Massacre. It's your choice.

Starting to walk the walk already avec said Card. Actually, I didn't bother taking it out for 24p off a £2.45 cappuccino at Base, from where I am writing this. I could have but thought 24p wasn't worth it. Will certainly do so when next I have a more substantial luncheon which, incidentally, is very good here (Ed. You stupid fool! 24p x 365 days = £87.50).

Off up to La Gaffe now to continue writing and editing the next edition of the Hampstead Village Voice from my McLaptop. It's filling up nicely and ought to be an amusing read. Could have done without Christmas... blasted thing always gets in the way. 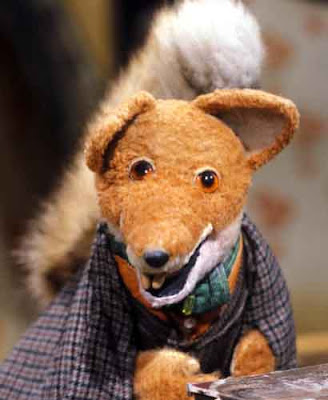 It's very late in the bünker. A good day. Completed Fox News and Dr. Klaus Von Kunst's pages. Klausy has outdone himself this time. A really good piece. Still waiting to hear from the Midfield General who has threatened to write something and have to get started on the advertising side of things. May need to go to 40 pages for this edition due to the space taken up promoting the Hampstead Village Card.

Popped into Wilmersdorfer Platz and purchased 7 winter socks for €6 and two jumpers for €19 a piece in C & A. They still have C & A and Woolworths in Berlin. Also went to the Jade Massage in Mehringdamm. You lie on a bed of warm 'rollers' and it uses your own body weight to massage you. 30 minutes for €8. Most splendid.

Time for that late night cup of tea, a piece of cake and classic film again. I think tonight, Kubrick's 2001 A Space Odyssey or maybe just an episode of Curb Your Enthusiasm.

Oh, and a song I co-wrote some years ago called has been re-released by an act called SUNWAY in Miami. I noticed there were no writers credits anywhere on iTunes or YouTube and when I had the gall to ask why via the artists YouTube page, was scalded in an email from the producer for being 'uncool'. I've been out of the music business for so long I'd forgotten the etiquette and that one is supposed to be 'cool'. Oh well. Here's Broken Heart, it's rather nice:

I sent an apologetic email and the artist has now added the songwriter credits which I think was rather nice of them. 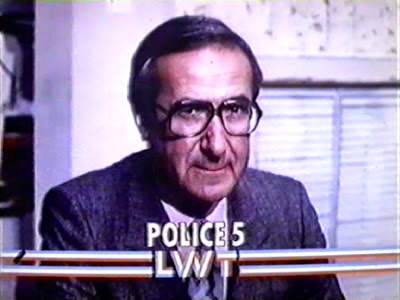 It's 1.45 am (Berlin Time). Quite exhausted. Have been editing away at two stories on Hampstead Police Station and one about a man with a megaphone and am ready for a cup of tea and half an hours mindless telescreen before retiring.

One of the stories is by retired ex-copper and local Hampstonian, Barry Doble. A very decent fellow of the old school with a good insight into where it's all gone wrong. It's interesting to see how horribly wrong it has gone. How Airstrip One's (Britain's) infrastructure seems to have collapsed almost completely. Policing is a good case in point here. And Barry's report, comparing Hampstead Police Station in 1970 to that of the present day is a stark and obvious indicator of Airstrip One's s slow and painful demise.

The second story by a Hampstead local Lord Winston Montgomery-Baden Powell III who confesses to being slightly politically right of Genghis Kahn and likes nothing more than popping into a police station to report some felon or other will either need chopping or some radically leftist editors comments to prevent people from thinking they're reading the Daily Hate Mail. That having been said, he makes some pertinent points.

There's also an excellent piece, also involving the police (Ed. Cor blimey, they're really getting a run for their money in this edition) from love revolutionary and 'spiritual entertainer', Danny Shine, the man with the megaphone. That is he did have a megaphone but someone pinched it, hence the police, but more importantly his imaginary friend... it's a bit complicated. But a bloody good story.

All that and more to look forward to in edition 17 of the Hampstead Village Voice folks.

Right, off to tea and telescreen (will watch the second half of Dangerous Liaisons which I started yesterday... So not too mindless. It's the tea and biscuit that I'm really looking forward to (Leibniz Chocolate - by Jove the Germans do make a good biscuit... eat your heart out Mr. Kipling). 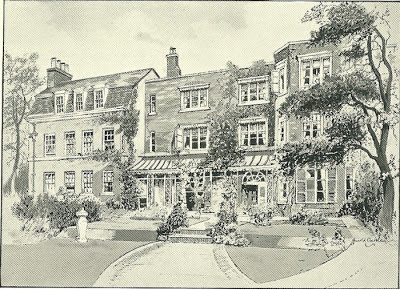 The Battle of Bay Tree Lodge

I have been reading the Orwell Diaries and have been inspired to restart my late night blog from a Bünker in Berlin. It's currently -3°c and the snow has settled firmly onto a layer of compound ice.

Only went out once today to take a large coffee and two bread rolls with cheese and salami for €3.70 at the local bakery. The girl there was apologetic about the special deal going up from €3.25. Laughable to a Londoner. Even more laughable to a Hampsteadite.

The bus was 3 minutes early and I scalded the bus driver. This being Berlin in Winter, I'd timed my journey to the bus-stop to be there two minutes early so as not to freeze for more time than was necessary. One can normally set one's watch to a German bus timetable so for a bus to leave one minute early is seen as a heinous and contemptible crime. Had I missed it, it might have meant a needless 10 minutes in the bitter cold. Laughable in London - but the going rate here, I assure you.

Managed to sculpt four pages of the next Hampstead Village Voice which I'm hopeful will go down rather well with the natives. Have invented a scheme effectively reversing inflation if one shops only with local independents. Inflation currently stands at 2.8% so with 10% off, Hampsteadites will enjoy deflation of 7.2% if they use our card. Completed four pages about that today.

Tony Parsons kindly donated a rather good rant and Ken Pyne a splendid cartoon to accompany it. Another page, so five today.

Yesterday was the 12th of the 12th 2012 and the last time in our lifetimes there will be such a date.

Oh yes, the The Battle of Bay Tree Lodge. Two pages of leader comment on how tenants are treated as second class citizens in modern day Airstrip One citing my own exile from Hampstead as a result of said battle. I think it came out rather well, but let's see what you think. That's seven pages including yesterday.

Like British Rail used to say, when there was such a thing, "We're getting there."

Ought to be published in late January of 2013.