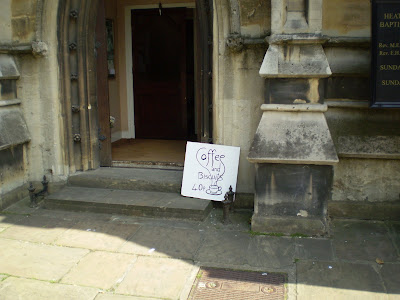 If you want a nice cup of coffee for 40p you could do a lot worse than pop in to the church on Heath Street this weekend. You'll even get a free biscuit thrown in! Well Played the Baptists! No, not Baptista! He's rubbish. So's Henry! Good riddance! Couldn't kick a ball to save his life! While we're at it- All banks are complete arseholes! Yes! It's true! Their just a bunch of complete wankers so we're off to the Post Office to open the Hampstead Village Voice account. Actually, given the choice we'd run it from a shoe box but HMR&C wouldn't stand for it. So to name and shame: NAT WEST made us fill out loads of forms, tried to sell us insurance and various other services we didn't want and messed us around for a month then...."Computer said no!". BARCLAYS didn't have the bollocks to take our money either! We didn't even want a loan! Not a penny! Just to deposit a load of cheques from our local advertisers. Yup! That's how bad the HVV's credit is! But as an old radio presenter mate of mine Scottie Chisholm always used to tell me, "Give them 20p and tell them to go and phone someone who gives a toss!" and "Don't let the bastards live rent free in your head". Wise words indeed. Banking aside, things are going swimmingly and we're on track for the launch in September. We'll see you all at The Tabby Cat Lounge at 7pm on Thursday September 6th for a party Hampstead will never forget! Your very own, Mustafa Goldstein.
at June 25, 2007