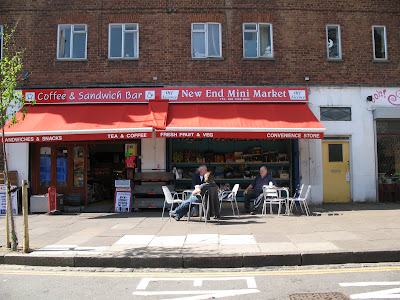 The launch of the Hampstead Village Voice is on September the 6th 2007 at the Tabby Cat Lounge (formerly Maxwell's). Be there between 6-8pm with a copy of the Hampstead Village Voice and recieve a drink on the house! Result! Incidentally, above is The New End Mini Market (formerly Carnegie Stores) where one can buy an avacado for 49p. And the best news of all is that every time I've purchased one it's ripe, fresh and ready to go unlike Stressco, where the Av's always seem to be as hard as rock and a lot more expensive! You may also notice a certain Michael Wooderson (aka. Woody) sitting outside. It would appear he has finally passed the reigns of The Duke Of Hamilton and retired t'ut country. The end of an era if ever there was one.Toodle Pip Old Bean! DS
Posted by Hampstead Village Voice at 07:38

Oh dear, I hope that your parish / parochial news letter updates more often than your blog.