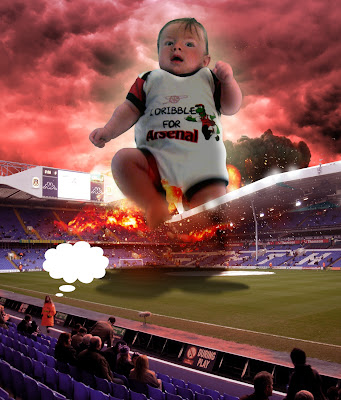 Our editor, Emanuelle "Mustafa" Goldstein (Seen above, disguised as an angry Arsenal baby, completely obliterating White Hart Lane) has buggered off and is no longer in charge of the Hampstead Village Voice. Indeed, our intel leads us to believe that as of April 1st 2008, he has officially ceased trading completely and was last seen heading towards Stamford Bridge on a mission to obliterate that too. Apparently he then plans to spend a year in bed to contemplate the fluff in his navel and avoid any sort of contact with Governments, corporations or Manchester Utd supporters.
In an unofficial statement he said, "It's all too much for me. I can't walk down the bloody High Street anymore. All this media-whoring's for arse-holes. I'm turning into an arse-hole! And I even allowed those scumbags Top Four Tottenham Hotspurms to advertise in the Summer edition of my beloved magazine! For money! I'm nothing but a cheap whore! I'm worse than the Himm & Heil Express. I just can't live with myself. I used to be such a nice, laid back kind of guy. Please release me! I'm running low on precious bodily fluids...I...I...can't. These things go down. I mean they really go down!"
We're still trying to work out the last part of that statement but can assure you that the Hampstead Village Voice will not be affected by Mustafa's apparent mental and emotional breakdown. We will make sure he receives the best possible treatment and that you the precious reader will not be affected in any way.
So here's looking forward to Mustafas swift recovery and Edition 4 of the Hampstead Village Voice which will be ready...well, when it's ready. Probably June- if you're lucky.
Toodle Pip and may your breasts yield much soya.
El Consiglieri
On Behalf of the "Bored".
at May 02, 2008