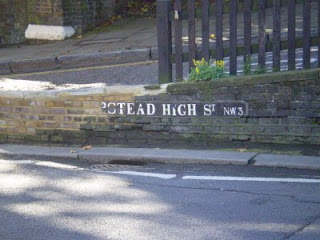 Above: One day Scamden will get round to finishing this. That's if Hampstonia doesn't declare independence first.
I once had a science teacher at Hampstead Comprehensive School called Mr Barnet. His first words to us all were: "A picture tells a thousand words". Well, if these pictures are anything to go by, it would appear there's little local pride left in the maintenance of dear, sweet, beautiful Hampstead these days.
Why?
In a word: Scamden.
Is it now time for us, the proud Hampstonians of Hampstonia to storm the Bastille in Judd St (that's Scamden's HQ in Kings Cross) and revolt against those that simply don't give a shit about us or our beautiful Hampstead? And why should they, they're in Kings Cross for God's sake. They're used to wallowing around in umskah.
Why should we allow some blasted authority in King's Cross to balls up our lovely manor? No disrespect to King's Cross but Look at the place. It's a bleedin kahsi. Camden Town? It's practically an open crack-house. It's time for the London Borough of Hampstead (better still the nation state of Hampstonia) to take control of everything north of Pond Street, west of Hampstead Heath (including the Heath, of course), south of Whitestone Pond and east of Finchley Rd.
If Scamden want to allow King's Cross, Kentish Town and Camden Town to rot in a mass of chewing gum, split plastic bags and shit looking street furniture then good luck to them. But we say to them now in plain English: "Get out of Hampstead, please, you incompetent fools!" 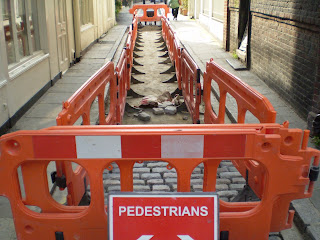 Above: all in a days work. And what you see there was one days worth of cobbling (cement not included).
It's beyond comprehension... first they dig up Perrin's Court and replace the cobble stones that have been there for, well, as long as I can remember (42 yrs) with cheap nasty tarmac. Then, at vast expense to the council tax payer, Scamden hire the Rumanian version of Laurel & Hardy to do the whole thing again avec cobble stones. It has been pointed out to me by more than one local that those two blokes have managed about three yards of cobbling a day in between about seventeen fag breaks and a lot of staring into open space. Their working day also seems to start at about 11am and end at 3pm and, unsurprisingly, they've been cobbling this tiny stretch of Perrin's Court for well over a month.
A similar botch up happened in Church Row just prior to the Perrin's Court debacle at the cost of an extra £10,000.00 (Ed. And the rest).
In conclusion, Scamden are either ignorant of what is required around here and mis-inform their builders as to what needs to be done or are sub-contracting to well dodgy geezers who balls up as much as possible so they then have to return and do the whole job again at a huge cost to you, the council tax payer. And you wonder why your council tax is so ridiculously high and the country is embarking on a recession. Viva La Revolution!
Emmanuel Mustafa Goldstein
Victory Mansions, London
Airstrip One
1984-2008
at October 20, 2008