Pledging allegiance to nothing in particular... 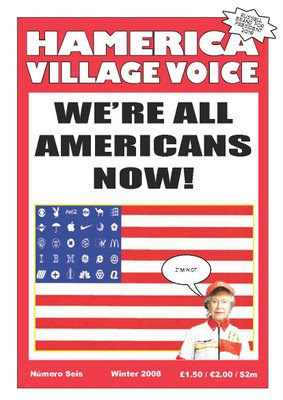 The Hampstead Village Voice (Edition 6) is currently doing swift trade at Hampstead News Agents.
Yes, that's right... Americans are buying it in droves just to burn it. Massive piles of the the Hampstead Village Voice have been spotted in flames on Parliament Hill and the American Embassy (The Rosslyn Deli) and U.S. Consulate (The Holly Bush) have been holding rallies and crisis meetings to deal with, what has been taken in some quarters as, "anti-Americanism" and "Commie Subversion".
But rest assured my Septic friends - nothing could be further from the truth. On the contrary, we at the Hampstead Village Voice have ceased to "fight" the inevitable and have happily conceded that we are in fact all Americans now. Yesiree Bob! Wooh! Yeahy! It's all good! Awsome dude e.t.c.
And being the commie-pinko, anarchist, liberal subversives that we are, we are delighted at the election of Barack Hussein Obama to the White House. So much so that we've paid him a special tribute in our page 5 leader column which he shares with the equally monumental re-paving of Perrin's Court N.W.Trois.
But not as delighted as we were at the election of Mario as winner of the Jon Moss of The Year Award! Or Adnandus Dyzantae as Author of the Year; The Duke of Hamilton as Top Boozer of the Year; The Coffee Cup as Best Café; Caffé Bianco for Best Coffee... Oh the list goes on.
There were a total of 40 awards handed out at Burgh House on Wednesday the 3rd of December 2008 and by Jove did we have a laugh. An audience of 8o watched in sheer terror as Mustafa Goldstein, Henry Kelly and Jon Moss handed out awards to the great and the good and the somewhat disoriented of Hampstead. There were another 20 Hampstonians hovering around the bar at the back whom top author and late arrival Tony Parsons later described to me as "Hampstead eccentrics". Bleedin' wino's more like. But hey, as long as they enjoyed themselves more power to their elbow. Alas I was so busy handing out awards and doing Dr. Strangelove impersonations in honour of the absent Klaus Von Kunst that I didn't see Tony and subsequently failed to invite him up to hand out awards to writers. What a pity for me, the writers and the audience but, on the bright side, Tony was spared 'the gallows' of public speaking.
There was a marvelous filmed "apology" from top DJ Nicky Horne "live" from "Honolulu" (Well, pre-recorded at La Gaffe - who won Best Hotel- but there was a palm tree behind him!) and possibly the greatest audience of all time including ex-councillor Mike Green(Con) who, when offered HM Government (Lab) on a plate as candidates for the Most Annoying Authority Award and put it to the vote, didn't raise his hand! Very noble of him, I'm sure or did he just feel a large Labour presence in the room and just 'bottled it'?
Most importantly, Hampstonian of the Year Award went to Alex Cowan who bravely jumped out of a small plane for charidy.
Anyway, Paolo the pianist was splendid as was Burgh House, The Bugh House Buttery's grub and the Villa Bianca for supplying the Vino. And also Silva's for six bottles of port which went down rather swimmingly with all those "Hampstead Eccentrics" at the back!
Down With Big Brother! Viva la Revolucion D'Amore!
E.M.Goldstein.
E.M. Goldstein, enemy of Big Brother.
at December 05, 2008

Lardy dah! What a top blog.

Greetings und guten tag mein dear Hampstead reader, I am most sad not be in there in person for the Hammies, but please do read about my adventures in Miami below.