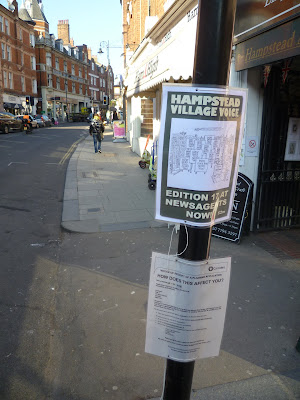 Heath Street: pointing out the obvious...

Against the advise of sub-editor Professor P. Dant, we've been tying posters above Scamden's HOW DOES THIS AFFECT YOU notices in order to highlight the absurdity of its planning permission proliferation.

As pointed out in the current edition of the Hampstead Village Voice, there are so many of these A4 notices flapping about - and rarely for the common good - that naturally, we thought this needed pointing out. 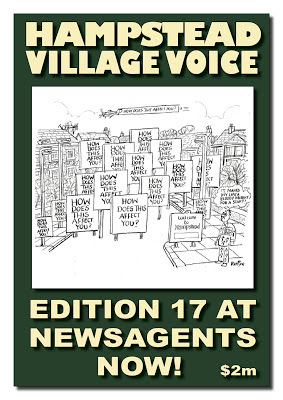 
Yes this is personal

Compounded by the enforced exile of yours truly to the Soviet Gulag of West Hampstead (p.7) after yet more over-development below and above Casa Goldstein, I felt it my duty to point out that Hampstead has become but a Monopoly board and Scamden are, more than allegedly, in on the deal.

The professor has warned me that, despite Scamden being the chief perpetrators and 'example setters' of said misdemeanour, we may still be hit with a £5000 fine for "fly posting".

Fortunately, I don't exist and even if I did I don't have £5000 and even if I did, I wouldn't give it to those blighters. Besides, Scamden would be foolish to further publicise what was, after all, a response to the dubious, if not dishonest, analysis which led to the TK Inyertesticles change of use.

Viva Hampstonia, land of the not so free!

I think other web site proprietors should take this web site as an model, very clean and great user genial style and design, as well as the content. You are an expert in this topic!

Nikki Montgomery is a fitness and beauty expert
with about 7 years experience in cellulite treatments.
And also some of the underweight people are also such complaints.
The device utilizes a cutting-edge laser fiber that delivers laser energy to melt the fat deposits, while also thermally subscising the tissue bands.


Feel free to visit my weblog ... How to get rid of cellulite naturally