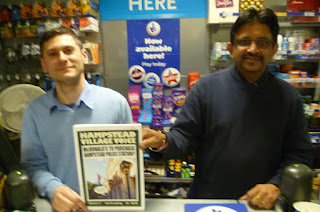 As well as the usual outlets, edition 18 will also be available at WHSMITH at the Royal Free Hospital from Wednesday the 15th of May 2013. So now even illness and injury can be a joyous experience. Indeed, I was in there to check my eye-sight recently which is probably why the above picture ended up out of focus.

There'll be an extra 4 pages in this edition to accommodate a rather dramatic and entertaining five-page interview with Giles Coren, guaranteed to rock your boat and annoy various individuals including his sister, various estate agents, the Polish Foreign Minister and Chelsea fans (Ed. What a combination).

Both Scamden's Planning and Press departments get a right roasting for being the complete incompetents they are in the stories Scamdengate and Pravda and the über-development of what was once a quiet, peaceful Hampstonia is covered at length, including the story by Hampstead Harridan of a retired couple about to enjoy the delights of living in a building site on Templewood Avenue.

We have a stern look at how Transport for London has managed to extort over £100 million from the public: the biggest scam in the history of London's public transport, not least because no one seems to have noticed it.

Oh, and the new Hampstead to West Hampstead bus link, including the controversial new terminus in Well Walk, is unveiled in all its glory on pages one and eleven.

And, as usual, the High Street Spy, Klaus von Kunst, Fox News and Hampstonianism will be at your disposal.

Write more, thats all I have to say. Literally, it seems as though you relied on the video to make your point.
You clearly know what youre talking about, why waste
your intelligence on just posting videos to your blog when you could be
giving us something enlightening to read?

Feel free to surf to my site: live naked webcam