The Spring Edition Takes No Prisoners 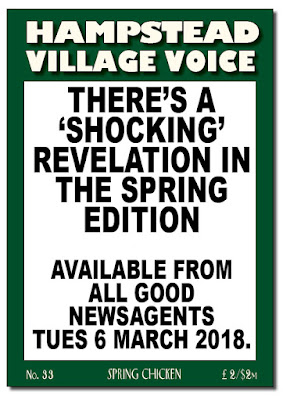 The spring edition has a real humdinger of a cover story that exposes the Hampstead Village BID Ltd for forcing a much loved, state-funded institution into paying its gratuitous levy. Worse still, the BID forces the council to force this state funded institution into paying it. The Spy calls for an end to this nonsense and a change to the legislation that allows it.
Yet more of a coup, we welcome broadcaster, former MP and top writer Martin Bell as a regular columnist and he'll be sharing with us his most original View From The Burb.
And there's a rather special interview with song writing legend Ken Howard who penned songs for Elvis, wrote a BBC play about John Lennon and, rather handilly, lives downstairs from Hampstead Village Voice editor Emmanuel 'Mustafa' Goldstein.
We've top stories from renowned writers Red Szell and Charles Harris and there's the latest goss on Ye Old White Bear, Burgh House, The Ladies' Pond and Hampstead's splendid new jazz venue, Hampstead Lounge & Jazz Club.
Mr. Goldstein indulges in a new column called Corporate Watchdog in which he exposes the deserving household names of corporate Britain with an iron fist: AA Home Insurance? You're Better Off With The Burglars pretty much does what it says on the packet.
With Klaus von Kunst rounding up the Arts scene, Carla Le Pond Antoinette deciphering transgender politik and the Ministry of Silly Names on page something or other... it's the issue that will have you wrapped in an enigma in a riddle in a mystery.
Viva Hampstonia and Toodle pip!
Emmanuel 'Mustafa' Goldstein.
Ed.

Aw, this was an extremely good post. Taking the time and actual effort
to make a top notch article… but what can I say… I hesitate a whole lot and never
manage to get anything done.