Edition Numero Otto's On It's Way! 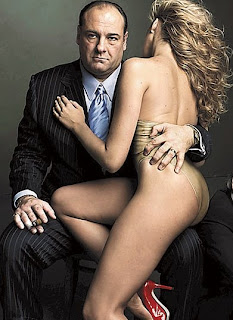 Tony Soprano makes a brief appearance in edition 008 of the Hampstead Village Voice which will be out in July 2009.
It ain't easy being a Don. It's 1.10am and I'm clocking off having put the final touches to pages 1-12 of edition 008. Tomorrow it's pages 13-36, then off to be proofed by The Midfield General and Dianne The Brief. All being well, this monster of a Summer issue will be in the shops by the 1st of July so pick one up and take it on your hols because it has to better than the EasyJet (SleazyJet) magazine. Although, truth be known, I rather like the SleasyJet magazine. In fact compared to the Ryanair (LyingAir) magazine it's a positive joy. Whilst I'm at it, I haven't flown LyingAir for over two years and you can rest assured I will never fly with them again. Why? Because they're shit, that's why. I have a list as long as the Great Wall of China of reasons I will never fly with them again but take my word for it - if you're going for a cheap flight, pay the extra fiver and go with SleazyJet because they treat you more like the family pet rather than a sheep to the slaughter which is LyingAir's default setting.
Toodle Pip!
Don Mustafa
xxx
at June 16, 2009