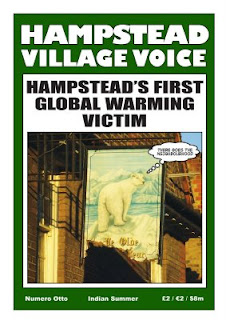 Everybody's buggered off and we don't care! Yes, Hampstead is definitely at it's best when the schools break up and all those snotty nosed little brats (just like me when I was a lad), bugger off on their hols and take their ghastly Four By Four, Hampstead Tractor mums with them.
Ahhh, there's nothing like a bit of peace and quiet and, were it not for those infernal police and ambulance sirens blasting their ear-piercing screeching noises at us all day, Hampstead would almost be as good as it was back in it's 1975 hey day.
I've taken it upon myself to release a new info-guide for Hampstead called The Hampstonian which will be out in the new year. It'll be free and, unlike that seedy little mag, the Hampstead Village Voice, will be utterly un-controversial and stuffed full of adverts.
You see, however much every one loves the HAVIVO - apart from that weird Daily Mail reading woman who hangs around the William IV and doesn't get it - The Hampstead Village Idiot doesn't earn a big enough crust to actually allow it's editor to live in Hampstead. That is it only makes about £2m a year, hardly enough to keep me, its editor, in espresso's - I have worked out that averaging 30 coffee's a day I need to gross at least £21,900 per annum just to pay off Caffé Nero. Add to that my Hampstead rent of £2m p/a and my Scamden Council Tax of £20m p/a and I'm decidedly down on the deal.
Thus the release of The Hampstonian which is going to be non satirical but afford me the opportunity of eloping to Brazil with a beautiful Brasiliana and living the serene life on a beach that I so richly deserve! Let's face it, the pension situation in old Blighty looks pretty shitty and Hampstead is deteriorating into nothing but a sub-soviet of Scamden. So who in their right minds would want to retire here?
Toodle Pip!
Musfarta OldSplean
Mustafa Goldstein
Ed.
at July 16, 2009

No, say it isn't so Mustafa! We love the HAVIVO, you cannot stop publishing it! What about selling out and taking ads from the likes of Stresco, Cafe Scrooge, etc?

ye olde white bear......what a travesty...ruined....reclaimed rusty garden chairs and a slab of marble for a bar....